Engineering around the world

Is Engineering the Same Around the World?

Do you wonder if engineering is the same in different places? Sure, the foundations are similar, but how are projects presented and discussed? Do different countries use different project management styles?

As engineers who work with international clients, we don't only want to use the right English words but we have to communicate our ideas effectively as well. It’s important to know how different countries present projects. In fact, if you know some of the unique quirks of the culture, people are less likely to notice your English mistakes.

Recently, I chatted with my old school friend, Christian Urich, about all things English and Engineering (big surprise, I know). Since we’re both Austrian, we talked about the differences between engineering in German and English speaking countries.

Let’s figure out what makes each unique.

Both Christian and I were educated and worked as engineers in Austria, so we’re very familiar with the work culture there. It’s different from the rest of the world.

When it comes to our engineering experience in Austria, one phrase sums it up best: “Let the drawing and numbers speak for themselves.”

As far as deliverables are concerned, we used to have a cover sheet with the table of contents, followed by pages and pages of numbers and designs (drawings) – that’s basically it in a nutshell. There weren't many words involved. Often the designs and calculations would cover metres of wall – not very user-friendly and filling up tons of folders.

My Austrian professors told me that writing isn’t important for engineers because we could trust the drawings and numbers. Anything more went against our national engineering culture. Mind you: that was back in the ‘90s.

If you chose engineering because “words aren’t your thing,” this might be your dream.

It’s no wonder many engineers struggle when they realise they have to go beyond numbers.

Many engineers find that communication is more than important. It’s a large portion of their job – especially when working with overseas clients.

Outside the German bubble

When I speak with other European engineers e.g. from the Netherlands or England, I notice they work differently than my German/Austrian engineers.

Project management frameworks like SCRUM or AGILE are much more common in places like the Netherlands and beyond, for example. These systems or tools are often used in larger projects when you don’t know what the exact outcome of the project should be. Even though those systems originate in the IT world, they have found their way into big infrastructure projects; at least: that’s my experience in the Netherlands.

But very much like in Austria and Germany, there are a lot of small and highly specialized engineering companies in Europe.  And they might even go after jobs within Europe, Russia, and even the Middle East.

Each European country kind of has an engineering niche of its own. For example, Austrian engineers are known for their experience in tunnelling technology.

The communication style between engineer and client outside of Germany and Austria is also less likely to be numbers-based. You’ll find document-based or even model-based systems engineering in the Netherlands, for example.

More about that next!

Whether you’re working with an Australian, New Zealander, American, Canadian, or British firm, English-speaking engineers tend to have a different system from Europeans.

For starters, there are many more large firms. Instead of a small, highly specialized company focusing on one area of expertise, you’ll find large engineering companies that do everything. This changes how projects are planned and executed.

Most expect a one-page report with every project or project update. This one page doesn’t change in length, no matter how big of a project it is.

In this report, you need to:

Many clients will only read the executive summary, so it must include all the important information. If they want to know more, they can leaf through the numbers and drawings as needed.

Unfortunately, for my word-scared engineers, this means you have to write. Instead of letting the numbers speak for themselves, you need to speak for the numbers. Don’t worry. It’s not as scary as it sounds.

Tips for presenting to an English-speaking audience

There’s a lot to think about when working with an English-speaking client, especially if you’re not accustomed to document-based engineering. All language aside, here are some cultural tips for nailing your next presentation.

Does this feel like a lot? Then you’ll love our next blog post delving into writing in business English and gaining confidence.

In the meantime, you’ll want to catch my podcast episode #5, Engineering Culture.

This blog was inspired by my podcast conversation with Dr. Christian Urich, an Austrian engineer turned Australian. You'll want to tune in if you want to learn more quirks between cultures, including travelling to business meetings and how Christian managed during the harsh Australian lockdowns. 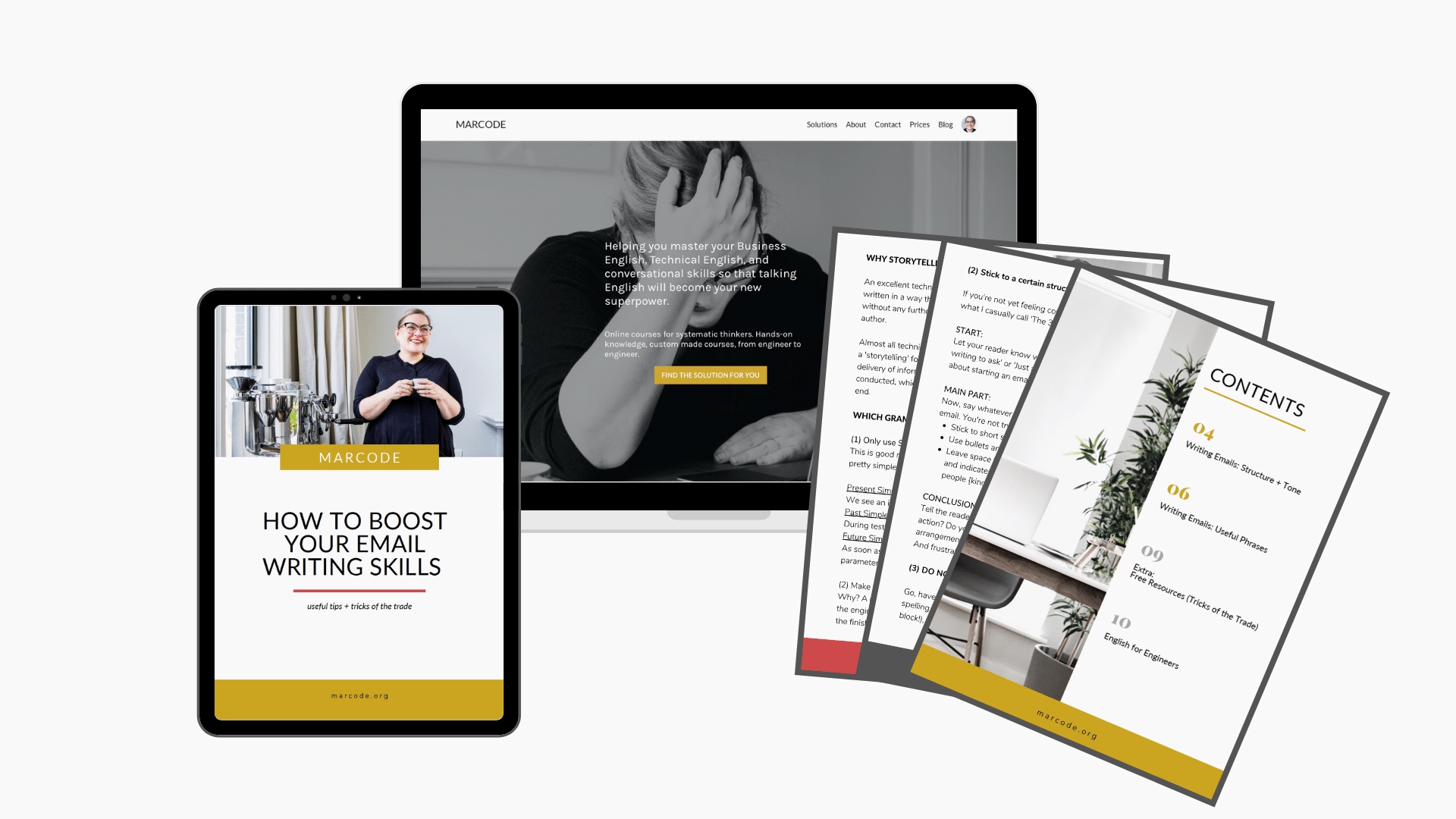